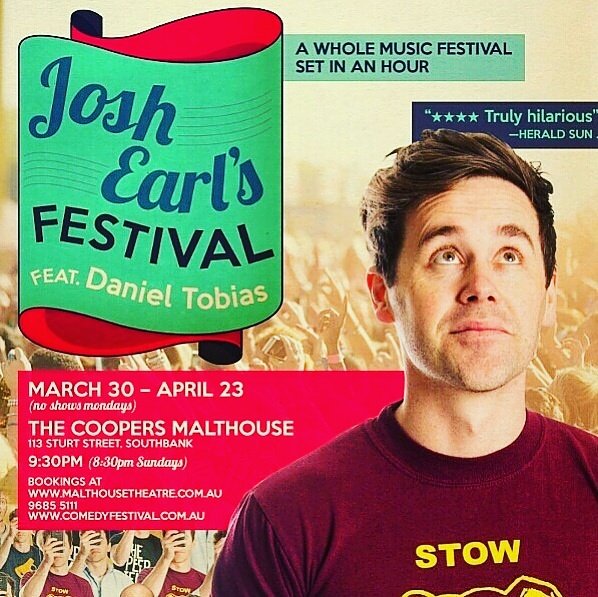 The Josh Earl's Festival is showing as part of the Melbourne International Comedy Festival. It has everything you love about music festivals with the added bonus of not having to sleep in a tent. Long lines? Check. Overpriced drinks? Check. Vegetarian options, that look like they’ve already been digested? Check. Plus music, bands and sniffer dogs at your entrance.

Join Josh as he embarks on a journey of a thousand frustrations, navigating a festival crowd of flag capes, drum circles and muscle bros as he tries to find his friends who are '20 metres left of the sound desk' with only 15% battery life left.

Plus a line-up of bands including Hot New Band Playing First Up On The Main Stage Before The Gates Are Opened, a 90's reunion band who refuse to play their biggest hit until the end, plus a DJ sweating under a helmet as he presses play on his MacBook Pro (all hilariously performed by Daniel Tobias)

Josh Earl is one of the funniest comedians in Australia with a CV most performers would dream of. An award winning live performer (Fringeworld Best Comedy) plus years of experience in TV (Spicks and Specks, MICF Allstars Gala), radio (3RRRFM Breakfasters) and print (Sunday Tasmanian, Frankie)

Daniel Tobias is one half of the self-appointed best band in the world Die Roten Punkte as well as being an accomplished actor and writer having performed in festivals all over the world. As Otto in DRP he has been described as a 'lipstick smeared, tantrum-loving, sonic collision between the B-52’s, Kraftwerk and early Ramones.' In 2015 Tobias went solo in his award winning theatre show The Orchid and the Crow at the Malthouse Theatre, which went on to tour five cities in Canada and had a season at the Edinburgh Fringe.

And let’s be honest, what is a music / comedy festival without a little Kaboom Confetti?

To borrow from a comedic critic “This is a fun and hilarious piece of theatre about a collective experience which many are nostalgic for or still look forward to every summer, it deserves a big crowd of music comedy fans ready to have a ball. This is one festival within a festival you should attend.”

Josh Earl’s Festival is on at Malthouse Theatre (The Tower) until April 23
https://www.comedyfestival.com.au/2017/shows/josh-earl-s-festival-1

Want to check it out?
Then purchase tickets at the Malthouse theatre to save on Ticketmasters booking fee..
Want a greater saving?
Then quote JEARL at the boxoffice for amazing value tickets!

Keep up to date on the world of Josh Earl at his website http://www.joshearl.com.au/

★ ★ ★ ★
Terrific stories condensed into comic pop songs, Earl delivered life lessons aplenty at a pace of delivery that gave his audience much to admire.